Studying data from the Kepler telescope, the team, led by the University of Birmingham, found a star orbited by five planets similar in size to Earth.

The system, 117 light years away, is the oldest known of its kind, formed 11.2 billion years ago.

Dr Tiago Campante said it could provide a clue to “the existence of ancient life in the galaxy”.

“By the time the Earth formed, the planets in this system were already older than our planet is today,” he said.

“This discovery may now help to pinpoint the beginning of what we might call the era of planet formation.”

Researchers said the star, named Kepler-444, and its planets were two and a half times older than earth and dated back to the “dawn of the galaxy”. 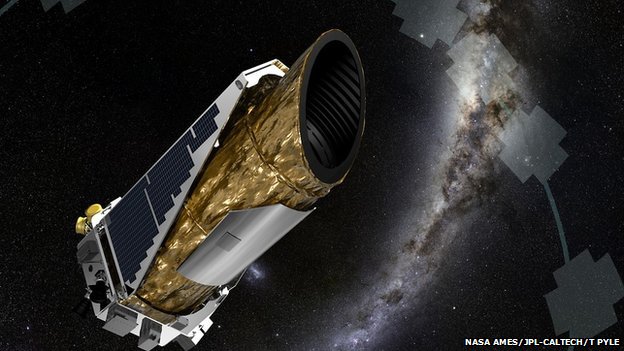 Planets ranging in size from Mercury to Venus orbit the star within the equivalent of 10 of our days.

While the proximity of the planets to the star ruled out the possibility of life, Dr Campante said the discovery showed planets of an Earth-like size, capable of supporting life, could exist around a similarly ancient star.

“There may be civilisations out there with a head-start of a few billion years. Imagine the level of technology,” he said.

Nasa’s Kepler mission has so far found hundreds of new worlds since in launched in 2009.

Scientists have studied the occasional dips in light as planets pass in front of their host stars.

Scientists studied the natural resonance of Kepler-444, caused by the sound trapped within it, allowing them to measure its diameter, mass and age.

Whatever happened to the future?

This site uses Akismet to reduce spam. Learn how your comment data is processed.